My cat, Cello, a Siamese Snowshoe recently underwent emergency colon surgery due to a complete blockage that was taking his life. He either had surgery or be euthanized. I and the emergency vet chose to fight for him!
Sadly, it was found that he has a cancerous tumor. We are fighting for Cello to save his life and implore your help! Whatever amount you give will be most greatly appreciated and used for his cancer fight and medical care!
Please give to Cello’s Cancer and Medical Fund!
https://gofund.me/fa25ac68
Thank you so very much! I appreciate everything anyone can do to help!
Posted by Janet G at 4:27 AM No comments:

Cello's Cancer and Medical Fund on Go Fund Me - Link Below - Please Help Us Fight For Him! 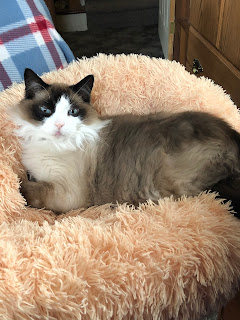 God gave this beautiful cat another chance and we are so grateful that he is here with us and that we sought the surgery consult but sadly, Cello does have cancer and a long road still ahead of him. He is so loved and we want to fight for him.
We need your help in order to continue to help him on his journey. We are facing much medical hardship down the road as we fight his cancer! Whatever you can give will go for Cello's medical needs and will be most greatly appreciated!
We love you and thank you from the bottom of our hearts! Cello sends his love! Please help us fight for him! 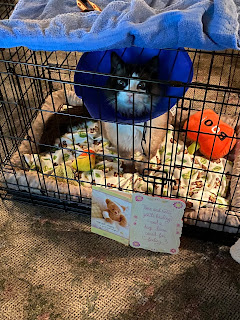 5 Teacups for Dawn Girl by Leslie Wolfe - A Must Read! 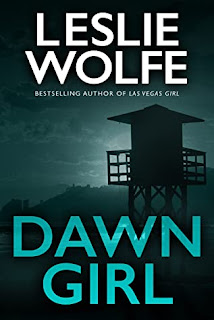 OMG, this book is riveting! It kept me on my seat the whole way through, I didn't want to stop reading, and I didn't! The main protagonist special agent Tess Winnett with the FBI has had a rough go with a trauma that occurred to her in the past which she has not revealed and the death of her partner and this has all taken a toll and begun to affect her work. So, she's sent on assignment to work with the local police department on a case coined Dawn Girl. She's soon drawn into a sadistic serial killer's world and finds out what he does to his victims and that there have been more in the past. She's soon on the hunt and won't stop searching for this killer and his latest victim before she too is killed, even if that means breaking FBI protocol!As we go on a roller coaster ride with Tess as she tries to find and stop the madman we also learn a lot about her and finally what occurred to her. In the end, you will be surprised to learn who the killer is but I won't spoil that for you, you must read this book!It is so incredibly riveting and just like Tess working long nights on her case, you too will be up reading long nights to find out what happens next! Amazing book and I can't wait to read the next in the series! Most highly recommend!

Email ThisBlogThis!Share to TwitterShare to FacebookShare to Pinterest
Labels: Thriller and Suspense

Author Spotlight & Review ~ The Way to London: A Novel of World War II by Alix Rickloff

The Way to London: A Novel of World War II 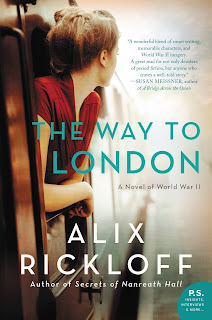 From the author of Secrets of Nanreath Hall comes this gripping, beautifully written historical fiction novel set during World War II—the unforgettable story of a young woman who must leave Singapore and forge a new life in England.

On the eve of Pearl Harbor, impetuous and overindulged, Lucy Stanhope, the granddaughter of an earl, is living a life of pampered luxury in Singapore until one reckless act will change her life forever.

Exiled to England to stay with an aunt she barely remembers, Lucy never dreamed that she would be one of the last people to escape Singapore before war engulfs the entire island, and that her parents would disappear in the devastating aftermath. Now grief stricken and all alone, she must cope with the realities of a grim, battle-weary England.

Then she meets Bill, a young evacuee sent to the country to escape the Blitz, and in a moment of weakness, Lucy agrees to help him find his mother in London. The unlikely runaways take off on a seemingly simple journey across the country, but her world becomes even more complicated when she is reunited with an invalided soldier she knew in Singapore.

Now Lucy will be forced to finally confront the choices she has made if she ever hopes to have the future she yearns for.

Oh, what a way to be swept in the past! I’m a huge lover of World War II and the many tragic tales of the survivors. This story is so well written and very well researched. One will not help but fall in love with the heroine, Lucy and want to see her find the life she so desires. She’s thrown through so many tragic events and through it all her heart sings to help those she meets along the way. I highly recommend this book! 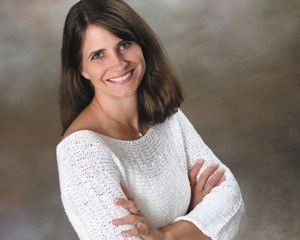 Critically acclaimed author of historical fiction and paranormal romance, ALIX RICKLOFF’s family tree includes a knight who fought during the Wars of the Roses (his brass rubbing hangs in her dining room), and a soldier who sided with Charles I during the English Civil War (hence the family's hasty emigration to America). Her latest novel, THE WAY TO LONDON (William Morrow), releases in September of 2017.

Connect with the Author:

Email ThisBlogThis!Share to TwitterShare to FacebookShare to Pinterest
Labels: Historical and Women's Fiction 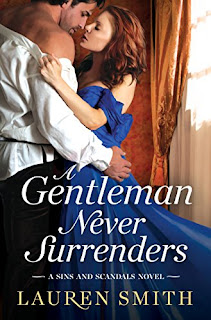 Love is worth a little scandal. Owen Hadley needs a wife. Preferably a wealthy one. Alas, there aren't a great number of heiresses willing to marry a rogue of no particular fortune---luckily, if there is ever a gentleman capable of melting a lady's chilly heart, it's Owen. Milly has had enough of the marriage mart. If matrimony means giving up her freedom for a foppish husband, then society can take their idea of marital bliss and toss it. But when the ton's most notorious rogue mistakenly makes his way into her bedchambers, Milly finds herself unexpectedly and unwillingly at the altar . . . Yet the more time she spends with her new husband, the more Milly starts to wonder if the marriage she never wanted may be the best thing that's ever happened to her. Now it's up to Owen to convince Milly that what started as a mistake is anything but---and that every night with him will be more wonderfully scandalous than the last.

A dynamite 5 Teacups for A Gentleman Never Surrenders by Lauren Smith. Oh, my gosh, this story took my breath away! I was drawn into it right from the first paragraph and kept captive the whole way through! Smith's writing style is so enchanting and eloquent, she brings the characters to life through her prose. Also, such a deeply passionate book, one can't help but fall in love with Owen and be drawn to Milly as she begins to open her heart to Owen and fall in love. Truly an amazing tale and one to be added to every historical romance fanatic's library!

Lauren Smith is an Oklahoma attorney by day, author by night who pens adventurous and edgy romance stories by the light of her smart phone flashlight app. She knew she was destined to be a romance writer when she attempted to re-write the entire Titanic movie just to save Jack from drowning. Connecting with readers by writing emotionally moving, realistic and sexy romances no matter what time period is her passion. She’s won multiple awards in several romance subgenres including: New England Reader’s Choice Awards, Greater Detroit BookSeller’s Best Awards, Amazon.com Breakthrough Novel Award Quarter-Finalist and a Semi-Finalist for the Mary Wollstonecraft Shelley Award.

The Daughters of Ireland (Deverill Chronicles) by Santa Montefiore

The Daughters of Ireland (Deverill Chronicles) 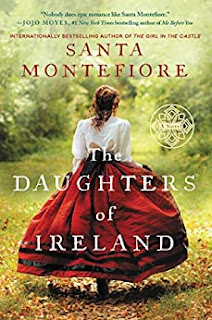 ABOUT THE BOOK: In Ireland 1925, the Anglo-Irish war is long over, but life will never be the same. Castle Deverill has been home to the Deverill family in West Cork for hundreds of years, until it fell prey to a devastating attack during the war. Young Celia (Deverill) Mayberry and her husband bought the estate, determined to restore it to its former glory. But not everyone is elated. Although Kitty is grateful to her cousin for ensuring the castle will remain in the family, she cannot help but be wistful for the days when she was the mistress of Castle Deverill. While she is content in her new life, her heart still yearns for Jack O’Leary. As Kitty struggles with her choices, she must make a heartbreaking decision that could hurt those closest to her.
Wealthy and the toast of the town in New York City, Bridie Doyle has come a long way since she was the daughter of one of the cooks at Castle Deverill. But all her money cannot ease the pain over having given away her baby or from seeking revenge upon the woman who wronged her all those years ago.
As Celia wastes no time, or expense, in hiring workers to renovate Castle Deverill, dark shadows are gathering once more, as the financial markets begin to shake. Now everything that felt so certain is cast into doubt as this daughter of Ireland must find the inner strength to build a new future.

This story is so amazing and well-deserving of a High 5 Teacups! Be swept back in time to the beautiful, lush, rich lands of Ireland and the castles that stand strong protecting her land. In the Daughters of Ireland, we meet Celia Deverill-Mayberry, who recently bought Castle Deverill, home to generations of her ancestors. She and her husband want to restore it to its former beauty but at every turn, they are met with strife and struggle from financial woes to individuals who hold many years’ worth of grudges. Will Castle Deverill ever return to its former glory? Will Celia finally be able to settle into the home of her dreams and childhood?

The plot in Daughters of Ireland is so thick and takes you on many twists and turns. The setting is just breathtaking and the characters are so well developed. I really enjoyed this book, not only do I love a good historical but the devotion and love Celia has for her family's estate and the land she loves so dearly.  Truly one of the most enjoyable reads of the summer!
Posted by Janet G at 6:22 AM No comments:

Email ThisBlogThis!Share to TwitterShare to FacebookShare to Pinterest
Labels: Historical and Women's Fiction 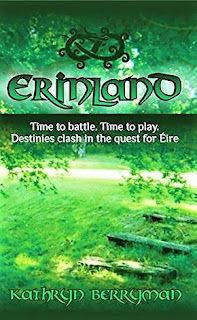 Two troubled young adults find themselves key players in a deadly game that spans the 21st century and the Viking Age.
Amy, finding it difficult to ‘fit in’, becomes increasingly obsessed with the virtual reality game Erinland. The VR characters and the mist of Erin begin to invade Amy’s dreams and her waking moments. She finds herself drawn into Erinland in 9th century Ireland. Amy becomes part of this mystical world as she joins in the struggle to defeat the Viking raiders.
Richard has a complicated home life and feels he doesn’t belong anywhere. A series of events finds him desperate and living on the streets, where he finds himself dragged into 9th century Norway by a Viking warrior. Richard finds acceptance with the Vikings and joins them on a colonisation raid to Ireland.

A dynamite 5 Teacups for Kathryn Berryman's Erinland, a totally different fantasy book, nothing like you've ever read before! This book kept me captured and intrigued from cover to cover! If you love time-travel, historical elements, and a fantastical make-believe world, then this is the book for you!
The world-building is very well done in this book, the characters are well-developed and so very unique with their own individual personalities that bring a lot of spark to the page. You will not be displeased with Erinland, I highly recommend this book!