A Wedding for Christmas: A Twilight, Texas Novel by Lori Wilde

A Wedding for Christmas: A Twilight, Texas Novel 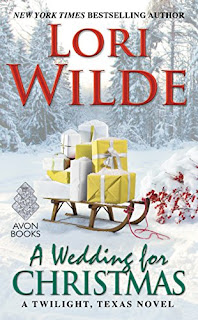 Sweet, sensual and a funny read that must be on everyone’s Christmas list this year! A Dynamite 5 Stars for Lori Wild’s, A Wedding for Christmas: A Twilight, Texas Novel!

We first meet Katie Cheek in L. A. at a celebrity party, she’s switched places for Christmas with one of her best friends. She’s come to L. A. and her friend is staying in Twilight, Texas. Katie is feeling beautiful and for the first time in her life; sexy and sensual. She was the geeky kid back in school who wore glasses, had braces, frizzy hair and yes, an obsession for being neat. However, now gone are the glasses, braces and frizzy hair, the neat-freak still remains, but she’s feeling drop-dead gorgeous as she walks into the party, heads turn.

She knows men want her, but she isn’t pining after them. No, she’s still in love with her older brother’s best friend, Ryder Southerland. Ryder lived with them for a year when she was in eighth grade and Katie was smitten. However, the day after Katie kissed Ryder, he heads off to the Army and leaves her heart bleeding and thinking she’d scared him off.

Years later, at this fancy L. A. party, Ryder is a celebrity security guard and whilst chasing a stalker (or so he thinks) he knocks over this blonde lady in red and to his surprise, is his best friend’s little sister, Katie Cheek. Learning that Katie is not the stalker and was running to the women’s restroom because she got wasabi spilled on her and was now developing a severe rash, he offers her a ride home to his place.

Whilst there, he and Katie have a fling and the next day Katie runs back to Twilight Texas, thinking she’ll never see Ryder again. That is until a year later, when her brother and her best friend are getting married and who’s the best man, none other than Ryder himself. Also, in the mix, Katie is a professional organizer, having put her neat-freak habit to good use, she’s asked to take on a very severe case of hoarding. She usually turns down hoarders, but this one tears at her heart. It’s Ryder’s father, the Circle S, his home is filled with dirt and grime and buried to the hilt in trash and he comes home from the hospital in a matter of a couple of days. So Katie must work fast.

Whilst working her fingers to the bones, who comes knocking at the door, none other than Ryder himself. After learning of his step-mother’s death and hearing his father is in the hospital, he heads home early and goes to the Circle S, to find Katie standing in the doorway. In a whirlwind of twists and turns, Katie and Ryder are working feverishly to prepare his father’s home for his return and preparing for the upcoming wedding. All the while, they are growing more in love with one another. Can this bad boy from the past open his hardened heart and admit his feelings for Katie? Can this once geeky-girl-turned-gorgeous-woman open up and confess to her long-lived crush?

This is one of the best Christmas stories out there, reads like a Hallmark movie but with some passionate, and sultry scenes. You will fall in love with Katie and Ryder and root for their love all along. This story is filled with some deep family values and struggles that we can all relate to, to some degree. Also, the town of Twilight, Texas just draws you into their charm and Christmas festivities, the scenery in this book is so vivid you will feel as if you’re walking right down the streets. This was my first book of Lori Wilde’s and I must say I’m now, not only addicted to her writing, but addicted to this series and must get all of these book. I highly recommend this book, it will add some sparkle to your Christmas Season this year!

**Thanks to Avon/HarperCollins Publisher for gifting me a copy of this book for an Honest Review**
Posted by Janet G at 7:52 AM

Email ThisBlogThis!Share to TwitterShare to FacebookShare to Pinterest
Labels: Christmas