The Perks of Loving A Scoundrel 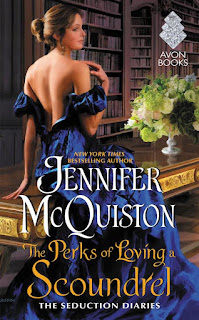 Oh this is such a wonderful, on the edge of your seat book that you will not be able to put down! I absolutely loved The Perks of Loving a Scoundrel by Jennifer McQuiston.

We first meet timid and shy Mary Channing, who has lived her life in the country and lived her life through books. Miss Channing is a book worm to a T and she does not have time for nor desire romance. She’s avoided London and having a Season, that is until she’s summoned to her sister’s home in London to act as chaperone during her last days of pregnancy. Bored already and striving to avoid the noisiness of the London high life, Mary seeks refuge in the garden with a good book. However, she’s soon greatly and ghastly interrupted by a gentleman, a very drunken one, who’s urinating all over the roses.  Shocked and appalled, Mary quite literally squeaks out her disgust to the man who happens to be one of London’s most notorious scoundrel’s; Geoffrey Westmore, who is quite taken by this shy creature reading in her nightgown.

Later these two meet again when at a literary reading, where Mary has the opportunity to meet some of her favorite authors, such as Dickens. However, she’s so terribly nervous and uncomfortable that she seeks solace in the library down the hall. Seeing this lady in blue, Geoffrey heads off in her direction in hopes of a naughty library tryst. However, he’s met by a very shy yet beautiful, Miss Channing who peaks his interest and stirs his insides. He soon realizes she’s the lady from the garden and she has really no desire to be in his presence. Soon they hear tapping at the door and Geoffrey hides them behind the curtain and clamps a hand over Mary’s mouth. He thinks it’s a couple also interested in a tryst. However, to their surprise it’s a foursome who are plotting to assassinate someone and with what little they gained, they know a duke is involved. In order to keep Mary quiet, Geoffrey kisses her and his hands begin to wander only to be surprised out of their little game of seduction when the door opens and standing there with his sister are guests and the authors.

The next day, Geoffrey goes to Mary to do the honorable thing by offering his hand in marriage, however, Mary refuses. She’s more interested in discovering and solving the assignation attempt. She thrusts at him a list of possible scenarios and whose life could be in jeopardy. Reluctantly at first, he does agree to attempt to solve this mystery. Soon the two are on a feverish quest to solve the mystery and save the day. Can the two stop the assignation from happening? In the midst of solving an impending crime, will the two solve their own dilemma and give into their passions?

This is my first book of Jennifer McQuiston and I’m am now a huge fan! This book is filled with passion, mystery, intrigue and yes splashes of humor throughout. If you love a good history romance and are a fan of Sherlock Holmes, you’ll love this book!

**Thanks to Avon/HarperCollins for gifting me a copy of this book for an honest review**
Posted by Janet G at 6:47 AM