A Daring Sacrifice by Jody Hedlund 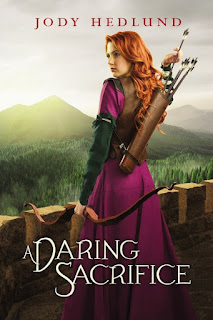 A Daring Sacrifice by Jody Hedlund is truly a masterpiece and well deserving of 5 Stars. This story will capture the heart of all readers and especially Robin Hood fans! Our young heroine, Lady Juliana is first seen being held down and about to get her thumbs cut off until she makes her escape and off into the forest she flees with the help of her friends. Lady Juliana is hiding in the deep forest just short of Lord Wessex land, she strives to save the peasants and bring them food and shelter. Lord Wessex and other Lords rule the land and force the peasants and workers into dire poverty, over taxing them and underpaying them so that they barely can make it. Lady Juliana has seen this occur throughout her life and despises the practices and therefore after her father the former Lord Wessex hides away in the forest and becomes a thief in order to help the peasants. It is during a thieving episode that she runs into Lord Collin and unbeknownst to her, he recognizes that she's a woman through her guise but he knows her from somewhere. So after she has taken his jewels and disappears off into the forest, he later happens upon her and snatches her away from her friends and takes her to his home. She escapes into the forest again and he catches up to her only she falls out of a tree and gets injured, so he takes her to his home. Here he finally realizes who she truly is, Lady Juliana Wessex, daughter of former Lord Wessex and he recalls meeting her as a small child. He wants to help Juliana but she wants nothing to do with the royal life she once descended from and wants to return to the forest to help her peasant friends and remain a thief. Can Lord Collin convince Juliana to let him help her? Will Juliana open her heart to Lord Collin and see the love he has for her?

Absolutely wonderful book, so well written and with such vivid detail and scenery throughout. One can't help but fall in love with the spirited Juliana and her loving heart. Just a truly exceptional story and I now must go back and read the first two in the series. This was my first book of Jody Hedlund's to read and must admit I'm now a huge fan and I'll be keeping my eye out for more of her stories to come. This is definitely a book you'll want to add to your library!
Posted by Janet G at 3:38 PM