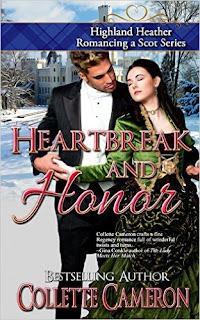 Heartbreak and Honor by Collette Cameron is a holiday tale you will want to be sure to add to your Christmas list this season. This is a remarkable 5 Star read that captures the heart of the Christmas spirit.

We are first met by Tasara Faas, a Highland Gypsy and her young siblings. They’ve been captured by a band of renegade Scots and one evil Blackhall. Soon Tasara and the young bairns are rescued from the dashing and handsome Duke of Harcourt. However, in her fear and feisty nature, Tasara blackens the duke’s eye when he kisses her. Soon her father comes to her aid and gathers his children and heads back to camp.
The next morning Tasara hears her parents talking about her and of how they had come upon her when she was a small child, to her horror she learns that she’s not actually their daughter but belonged to a Lady Atterberry and that she is in fact Alexandra Atterberry. She had been found harmed as a child and her mother and father took her in to the gypsy clan and claimed her as their own in order to protect her. Her father later reveals to her about whom she truly is and due to the recent scandal of her captivity she is asked to leave the encampment for the safety of the other tinkers.
Tasara (Alexandra) is taken in and rightfully claimed by her biological aunt and uncle. She’s taken to their home in London, England and there she begins her tutelage of becoming a Lady and gain her rightful inheritance. However, there is one catch the claim that her step-sister always has rights to the title and inheritance. Alexa begins the little season where at her first ball, she sees the Duke of Harcourt, Lucan and he soon takes a great liking to her.
The Duke of Harcourt must marry by Christmas as promised to his mother upon her sickbed. Although, he is seeking a wife he’d never expected himself to fall so deeply in love with a beautiful gypsy who has the most captivating violet eyes ever. He seeks the hand of Lady Alexandra Atterberry but she is none to accepting and refuses him not once but several times. However, she too begins to fall for the dashing and relentless Duke and soon finds herself enraptured with him and everything about him but she’s unsure how she would be as a Duchess and that she does not want to bring him hardships. The duke has found himself captured under his wild gypsy’s spell… but stumbling blocks abound at each turn of the pages.
Can Harcourt convince the violet eyed Alexa to marry him? Will Alexa admit her love and become the duchess she’s destined to?

Cameron’s writing is magnificent, she takes the reader on a hilarious and sweetly romantic adventure yet one that is also filled with mystery and intrigue. Her humor and wit are one of the highest points of her writing and with each page turn she leaves the reading in suspense of what is to come. Her characterization and style calls the reader to fall in love with the Duke of Harcourt, Alexa and the myriad of characters that grace the pages. She’s truly one of today’s most creative and talented authors.
Posted by Janet G at 3:42 PM

Email ThisBlogThis!Share to TwitterShare to FacebookShare to Pinterest
Labels: Christmas